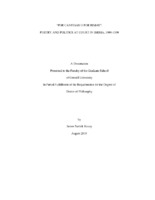 My dissertation explores how the Occitan lyric of the troubadours fits into the literary system of medieval Iberia and that of the broader medieval Mediterranean. To that end, I alternate between conceptual and literary-historical interventions, theorizing three concepts — court, agency, and subject — and analyzing three poetic scenes. Each scene stages close readings of the songs of a different “Iberian” troubadour — Guilhem de Peitieu (1071–1126), Guillem de Berguedà (…1138–1192…), and Guiraut Riquier (…1254–1292) — in their courtly contexts. In the first chapter, I theorize the court as a space, working from definitions in Alfonso X’s Siete Partidas, and lyric as a practice that helps to produce and regulate that space. Complementing that conceptual analysis, chapter two focuses on the songs of the “first” troubadour, Guilhem de Peitieu. I assess the vocabulary surrounding craft in Guilhem’s songs and its overlap, and disjunction, with that used in the lyric of Iberian taifa courts. Turning to the question of what lyric can do, chapter three draws from contemporary theory and medieval texts to develop an account of the agency of lyric. My fourth chapter observes this process in action, analyzing the corpus of Guillem de Berguedà, the combative Catalan nobleman and troubadour whose violent songs exemplify the extra-literary force lyric could exert. The fifth chapter explores the treatment of the subject in troubadour lyric, arguing for an understanding of the troubadour subject that is open and multiple rather than unitary and fixed. The “I” in these songs serves as a point of convergence for the complexity of the court: a space whose multiple functions contaminate each other until politics and pleasure become inseparable. This is the context I take up in the last chapter, focused on the court of Alfonso X and the “last” troubadour, Guiraut Riquier. Guiraut’s moment is one of dramatic change in linguistic technology and his lyric documents the attendant shifts in authority that result, even as he defends the value of his craft in its waning days.