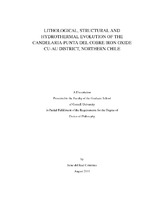 The Iron Oxide Cu-Au (IOCG) Andean belt is the youngest and best preserved IOCG belt known up to date. The Candelaria-Punta del Cobre district is part of this belt and is the largest IOCG deposit district of it, with more than 13Mt of contained copper. The district is characterized by an Early-Cretaceous volcanic-sedimentary arc sequence (±135-132 Ma; Punta del Cobre Formation), overlain by the marine-sedimentary Chañarcillo Group, formed in an extensional back-arc basin (±132–130 Ma). The Copiapó batholith, which occupies the western side of the district, is composed by three main intrusive phases: La Brea (±118 Ma), San Gregorio (±115 Ma) and Los Lirios (±110 Ma). Mineralization is hosted by structures, breccias, and specific lithological horizons predominately in the Punta del Cobre Formation. North-northwest left-lateral strike-slip structures are the dominant host for vertically extensive orebodies. Stratigraphically-controlled mineralization forms extensive stratabound ore bodies (“mantos”). Hydrothermal alteration in the district evolves in time from: (1) early Na to Na-Ca alteration extendedly mapped regionally in the district; (2) barren Ca-Fe alteration; (3) mineralized K-Fe to Ca-K-Fe; overprinted by; (4) Ca-Fe-Mg alteration and, (5) late K-Fe-CO2. The main mineralization event occurred at ±116-114 Ma, overlapping with the emplacement of the San Gregorio pluton. Thes ages are constrained by a pre-main phase mineralization dioritic dike dated by U-Pb zircon at 114.9±1.6 Ma and a late-mineralization dacite dike dated U-Pb in zircon at 115.2±1.8 Ma, both ages overlapping within error. The intrusive contact of the San Gregorio intrusive with the Chañarcillo basin (north of the Candelaria deposit) is characterized by a north-northeast oriented foliation zone parallel to the intrusive contact, where the Chañarcillo basin sediments form inward-facing folds against the intrusive contact. Inward-facing folds together with foliation suggest that the San Gregorio intrusive was emplaced during a contractional setting. Recent drilling through the foliation zone evidence that main-stage mineralization is syn-foliation, hence, formed during a transpressional setting. Horizontal contraction had a northwest-southeast principal stress direction consistent with the north-northwest left-lateral strike-slip faults that host mineralization in the district. This implicates that the deposits of the Candelaria-Punta del Cobre district formed in a transpressional structural setting, contemporaneous with batholith emplacement, and the onset of basin inversion and folding. The evaluation isotopical variation in pyrite grains throughout the district shows a complex story of hydrothermal fluid evolution. Ni, As and Se, together with Co/Ni ratios suggest a mafic affinity for the hydrothermal fluids in the district. In situ 𝛿34S values measured using SIMS range between -2 to +12.5‰, with most analyses ranging between -1 to +2‰, which points to a predominantly magmatic source for sulfur. Ni:Se and Ni:Co ratios in pyrite correlate with the 𝛿34S data, suggesting redox changes of the hydrothermal fluid that are recorded at the grain scale. These redox variations also correlate with the occurrence of different Fe oxides observed in the district, which include magnetite, mushketovite, specularite. Se/S vs. 𝛿34S data, on the other hand, show that the main-stage mineralization has a magmatic signal, while the late-stage mineralization has a more basinal signature. Our results indicate that the hydrothermal fluids responsible for mineralization in the Candelaria-Punta del Cobre district are unequivocally of magmatic-hydrothermal origin, with a late incursion of basin-derived fluids occurred that precipitated additional sulfides in the system. The extent of IOCG mineralization in the Candelaria-Punta del Cobre district reflects a combination of factors including changing regional kinematics and related fault architecture, multiple intrusive events, fluid access to permeable and reactive lithologies, vertical changes in redox conditions, and the potential role of multiple fluids.