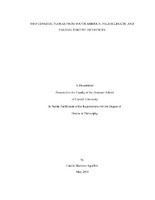 Tropical America contains more plant species than any other continental area. Understanding the origins of its flora and its adaptations to dynamic climate and topography during the Cenozoic are fundamental not only to studying its evolutionary history but also to predicting the effects of contemporary anthropogenic climate change. Here, I describe two floras from Tropical America, one from the Neogene of Peru and another one from the Paleogene of Colombia. Using detailed stratigraphic context, I collected numerous plant fossils that included leaves, fruits, seeds, flowers, cuticles, and wood, in addition to collecting rock samples for relative and absolute dating purposes, and for palynological (pollen and spores) analysis. The fossil material collected at each locality was carefully prepared, morphotyped, described, and when possible, formally named. Quantitative paleoclimatic and paleoelevation analyses were performed for each fossil locality and, in addition, I compared them with extant ecosystems and their characteristic taxa. The results from the Neogene of Peru support hypotheses that suggest that the plant fossil record indicates a rapid surface uplift of approximately 2500 m in the northern part of Central Andean Plateau during the late Miocene to early Pliocene. Estimations based on these analyses also suggest that, contrary to what paleoclimate models have predicted for this region, the precipitation of the Central Andean Plateau was higher during the early Pliocene and late Miocene. The evidence presented here for this site also documents the earliest Puna-like ecosystem during the early Pliocene, and the existence of a montane ecosystem without modern analogs during the late Miocene. The results from the middle to late Eocene of Colombia provide the earliest evidence of a seasonally dry tropical forest ecosystem based on both paleoclimatic analyses and taxonomic affinities of the floral elements. This site also includes the earliest confirmed record of Passifloraceae based on fossil seeds in addition to a legume samara from the clade Dalbergieae; a clade that is today mostly restricted to tropical dry forest ecosystems.