STRUCTURAL AND BIOCHEMICAL CHARACTERIZATION OF THE BACTERIAL FLAGELLAR MOTOR HOOK COMPLEX AND THE MS:C-RING INTERFACE 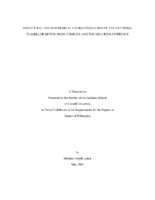 The bacterial flagellar motor (BFM) is a highly complex and specialized nano-machine that powers the rotation of the flagellar filament. The flagellar filaments serve as propellers to push the cell forward and make movement in liquid and semi-solid surfaces possible. The BFM and associated hook and filament components are composed of several distinct parts that reside in the extra-cellular environment, span the outer membrane, peptidoglycan layer, inner membrane, and assemble in the cytoplasm. Despite the extensive structural information that has been gathered on the overall architecture of the BFM, ambiguity still exists regarding the architectures of several key components. In this thesis, I present key structures of two defining protein complexes within the flagellar motility complex (FMC, i.e. BFM, hook, and filament). The first protein complex is of the flagellar hook protein FlgE from Treponema denticola (Td), a member of the spirochete phylum of bacteria. Unlike the canonical examples of FMC structure, spirochetes are unique in that they localize their flagellar filaments and hooks to the periplasm and, as a result, have evolved a mechanism to strengthen their hooks in order to operate in such a confined environment. Chapters 2 and 3 discuss the structure and biochemical characterization of the lysinoalanine (LA) cross-link formation reaction catalyzed by Td FlgE. Therein, I present the structures of all three protomeric states along the LA cross-linking formation pathway, including wild type (WT), the dehydroalanine (DHA) intermediate and the LA cross-linked FlgE heterodimer. The structural studies were augmented with site-directed mutagenesis experiments to probe the FlgE active site, revealing the extensive role that the hydrogen bonding networks within the FlgE:FlgE interface play in order to activate FlgE for the catalysis of such a unique protein cross-linkage. Lastly, I present an enzyme-coupled HPLC based sulfide detection assay developed specifically for the FlgE LA cross-linking reaction to show that DHA formation produces hydrogen sulfide as a byproduct of cysteine-178 beta elimination. In addition to discussing the LA cross-linking reaction of Td FlgE, in Chapter 4 I present the MS:C-ring interface FliFC:FliGN protein complex from the representative thermophile Thermotoga maritima. The FliFC:FliGN complex reported here has subsequently been reproduced in a crystal structure of the same complex from H. pylori. Comparison of the two complexes reveal that they are essentially identical, owing to the universal nature of the MS:C-ring interface within the BFM. In vitro and in vivo experiments conducted by collaborators from the Blair and Dahlquist groups suggests that the complex’s structure bears biological relevance in fully assembled BFMs in cells. Chapter 5 concludes this thesis with a look towards the future directions of the projects discussed (or not discussed) in chapters 1 -4. In appendix I, I describe the efforts made to generate, isolate, and characterize FliM:FliY complexes from Thermotoga maritima. Appendix II summarizes several assay development experiments carried out in order to generate a series of high-throughput screens and identify novel LA cross-link inhibitors. Lastly, in Appendix III I discuss the efforts made to identify and detect the LA cross-linked peptide from a range of different spirochete species including B. burgdorferi, T. pallidum, and T. phagedenis. In summary, my work has provided new insights into the flagellar hook and MS:C-ring interfacial structures of the FMC. In doing so, I have characterized and proposed a model of LA cross-link formation that is wholly consistent with all the data collected thus far, developed an in vitro H2S detection assay that enables sulfide detection and quantification over prolonged time-scales, as well as illuminated the MS:C-ring interfacial structure between FliF and FliG for the first time.