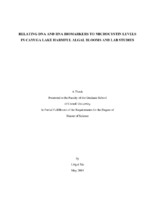 Cyanobacteria harmful algal blooms (cHABs) are expanding globally in freshwaters including the Finger Lakes region of New York State. cHABs can express toxins that pose a threat to public health via recreational or drinking water exposure. Current toxic HAB monitoring in New York State requires microcystin (MC) quantification by certified “ELAP” labs performing mass spectrometry or ELISA based methods. However, tests cost $150-$200 per sample and the limited number of certified facilities statewide lead to long lag times in getting results of testing (>1 day). There is value in testing new screening tools that correlate with microcystin levels but are cheaper and more rapid and can be performed in the field by common citizens without formal scientific training, such as those who volunteer to perform HAB monitoring in their home watersheds, such as the new HAB Harriers of Cayuga Lake. Here in this study, prokaryotic 16S ribosomal RNA gene (16S rRNA) Illumina sequencing was used to determine the community profiles in two Finger Lakes, Cayuga Lake and Honeoye Lake during late summer 2018. The microcystin synthesis pathway genes (mcy genes) of Microcystis, the most common genus associated with toxic HABs, are well studied and can be indicative of the presence of potentially toxic cyanobacterial strains and mcy gene transcripts can indicate expression of the MC synthesis pathway. Therefore, we targeted the Microcystis mcyA gene to quantify the corresponding gene and transcripts levels using qPCR and RT-qPCR. Correlation between potential biomarkers, mcyA DNA and RNA levels, with microcystins (MCs) were investigated in both field samples and lab cultures with a model pure culture, Microcystis aeruginosa PCC7806 to determine the best indicators for MC levels. A portable qPCR device, the Biomeme two3 was investigated for a rapid (<1 hour) on-site test for field samples. Additionally, monoculture experiments of Microcystis aeruginosa PCC 7806 were conducted under various N:P ratios to investigate impact of nutrients on mcy gene copies and transcripts as well as MC synthesis. The sequencing results indicated the two lakes had distinct community structures. Cyanobacteria were the most abundant phylum (59%) among the bacterial communities of Cayuga Lake, with Microcystis being the dominant MC producing genus (82% of cyanobacteria). Honeoye Lake had more Synechocystis (48% of cyanobacteria) than Microcystis. Although both mcyA DNA and RNA levels had a significant correlation with MCs in lab experiments, in Cayuga 2018 bloom samples (August/September) and 2019 pre-bloom samples (April), only mcyA RNA levels showed significant positive correlations with MC concentrations, while mcyA DNA levels did not, suggesting mcyA transcript levels could be better indicators of potential risks from MCs than mcyA gene levels. The handheld portable Biomeme two3 qPCR device would be promising in further lake monitoring due to its rapid procedure (< 1 hour), reasonable cost ($~40 per test) and inclusion of an Internal Positive Control (IPC) for qPCR inhibition testing to flag false negatives or underestimated gene or transcripts levels.