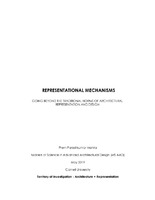 Representation gives a voice to one’s ideas, it gives a voice to that we ourselves cannot fully comprehend in our minds. It has taken many forms over the years, through drawings, paintings, music, and even through architecture. While for a long time, architectural representation was limited to plans, sections and elevations, new and more diverse modes of representations came into the picture, some analog while some due to technological advancements. Data can now go beyond graphs and pie charts. Documentation of spaces can now go beyond photographs. New atmospheres can be expressed through representation. By undertaking the Architecture + Representation territory of investigation, I aimed to explore a wide plethora of representation techniques, which ranged from Grasshopper analytical mapping, to hand drawings that generated abstract spatial qualities. I wanted to explore new arenas of design, that began with a new form of representation, something that was provocative enough to inspire but not super concise enough to be completely comprehended at the first glance. It must engage the beholders in a conversation, that is the genesis of innovation. From there begins an iterative process which further refines the initial idea, that takes a small sketch and transforms it into a concept to develop a space. Going beyond the design process, the representation methodologies aided to express concepts in the final phase of the design studio that encapsulated my initial notions. When done right, it can make the entire project come to life. It can show the performance of spaces, it can show a potential progression of the design process and more importantly it can provoke the beholders. Sometimes the representation of a narrative gives new life to the words written. The final result almost becomes an illustration of a world described in language. It can alter ones perception of what is considered to be a plan or section and through that, alter the means of design.