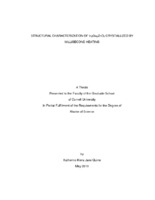 The growing overall size and pixel density of large flat-panel displays will demand commensurate improvements to the semiconducting active materials used in thin film transistor (TFT) backplanes. Literature suggests that TFTs fabricated in crystallized compositions within the (In2O3)-x(Ga2O3)y(ZnO)1-x-y ternary system (IGZO) will exhibit high mobility with controllable carrier concentrations, while also reducing trap states and electrical instabilities associated with amorphous IGZO TFTs. In this work, we examined the structural properties of IGZO alloys near the equimolar composition (In2Ga2ZnO7) which were crystallized using laser spike annealing (LSA) at targeted peak temperatures ranging from 1000 to 1600 C for dwell times from 250 µs to 10 ms. Films were sputter deposited from an IGZO target in 10% O2/Ar ambient to produce 140 nm thick amorphous films which were subsequently annealed using the lateral gradient LSA method. The resulting crystallized structures were characterized using ~10 µm spatially resolved wide-angle X-ray scattering (11.3 keV) and optical reflectance (400-1000 nm). X-ray analysis shows no change in crystallization behavior for peak targeted temperatures from 1400-1600 C, which we believe resulted from melting of the Si substrate and this limited actual temperatures to a 1414 C maximum. Two similar crystalline structures were observed and tracked over annealing conditions. The first structure appears consistently over the entire range of anneal conditions. We propose a model for this crystal structure consisting of ordered planes of random cation composition. The onset temperature for this first crystallization was determined to be 1280  50 C. The second structure emerges in coexistence with the first one at dwells above 350 s, indicating a kinetically limited structural transition. We model the second structure as a superstructure of In2O3 planes separated by one or two layers of Ga and Zn cations in a random solution. The onset temperature for this second crystalline transition is 1395  15 C. Optical reflectance results do not correlate with X-ray crystallization transition regions and instead demonstrate densification behavior that increases with anneal temperature and relaxes with longer dwell times. Continued research and technique development to study the structural properties and crystallizing conditions of IGZO alloys are critical to identifying future candidate compositions for display TFTs.