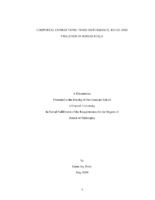 This dissertation explores non-elite Roman burial practices that involved post-depositional contact with dead bodies, including disturbance, reuse and violation. Roman tomb violation has been explored through a wealth of Latin anecdotal, epigraphic and juridical evidence, although the archaeological aspects have rarely been addressed. What is conspicuously lacking from studies of Roman tomb violation is the human body – the corporeal remains that constitute the tomb as a religious space, whose presence makes the act of tomb violation both possible and contradictory. Too often reopened and reused graves are glossed over in archaeological site reports, without further attention to the post-depositional and continuing commemorative rituals that dealt with the physical remains of an individual in a mortuary deposit. Corporeal Connections prioritizes human remains from mortuary contexts, with consideration of textual, epigraphic and visual representations of dead bodies in Roman Italy. It considers the handling of skeletal remains at the time of grave opening in non-monumental cemeteries throughout Roman Italy from the late first to the fourth centuries CE using the methods of archaeothanatology. By investigating human remains in different states of decomposition at the time of grave opening, this study argues that the addition of individuals and the manipulation of human skeletal elements could create and maintain inter-generational corporeal connections between the deceased and the living. This research is unique for its emphasis on the physicality of the body in the ongoing use and adaptive reuse of funerary structures in the Roman world.