CREATING A SENSE OF OBLIGATION: LEGAL MOBILIZATION FOR SOCIAL RIGHTS 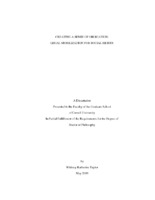 How and why does legal mobilization for social rights emerge? What explains variation in legal mobilization for social rights in terms of who makes claims and on which issues? Leveraging comparisons within and across cases, I investigate legal mobilization for social rights in two social constitutionalist countries, Colombia and South Africa. In Colombia, legal claims to the right to health have become ubiquitous, yet relatively few housing rights claims have emerged. In South Africa, on the other hand, legal claims to the right to health have been rather limited, focusing on HIV/AIDS related issues, while claims to the right to housing predominate. Existing theories of legal mobilization rest on implicit claims about subjective beliefs and tend to examine only one part of legal mobilization, segmenting off the process by which grievances develop from the process by which claims advance through the courts from the process by which judges render their decisions. In contrast, this dissertation develops a constructivist account of legal mobilization, explicating the central role of beliefs and unearthing the importance of repeated interaction between claimants, activists, lawyers, and judges for both the filing of rights claims and the official response to those claims. ​ Legal mobilization for social rights represents a new phenomenon, wherein both ordinary citizens and judicial actors have come to view problems related to access to healthcare, housing, social security, and education through the lens of the law, in effect pushing the question of social incorporation into the formal legal sphere. The goal of ensuring that each and every Colombian and South African is able to live a life of dignity remains unmet, but the legal recognition of social rights in both countries has empowered citizens to advance rights claims to the goods and services necessary for a good life. This dissertation investigates the changes in beliefs and institutions that allowed for this kind of claims-making to emerge, and it considers the manifold consequences of this kind of claims-making for state-society relations, access to social welfare, and the judicialization of politics.