SURVIVAL OF THE SELF: EXAMINATIONS OF THE ROLE OF SELF-REFERENCE IN ADAPTIVE MEMORY 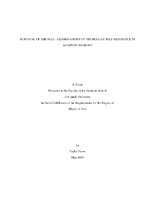 The survival encoding effect, or “adaptive memory”, shows a memory advantage to information processed in the context of one’s own survival. The self-reference effect, which also confers a memory advantage but to information processed in reference to the self, does not grant an advantage to memory recall as great as the survival encoding effect. The present study examines how each of these effects operates across stimuli type, and whether the survival encoding effect operates functionally as a distinct encoding process or as an augmented form of self-reference. Survival encoding and self-referential paradigms were adapted to examine the same concrete noun words in Study 1 (n = 60) and the same abstract trait words in Study 2 (n = 61), parsing out words related to self and other for each encoding process. A within-subjects design was used across five encoding conditions: survival-self, survival-other, self-reference, other-reference, and pleasantness (acting as a deep encoding comparison). In Study 1, significant main effects were found for person (self vs. other) and strategy (survival-relevance vs. self-relevance). In Study 2, a significant main effect was found for person but not strategy. Across both studies, the self-other memory distinction was abolished in the survival condition. These results provide evidence that “adaptive memory” provides a unique and stimuli-specific memory advantage and cannot be understood as an enhanced self-reference effect. Implications for the role of each encoding condition in maladaptive memory are discussed.