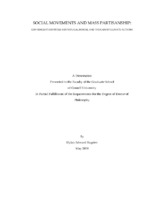 The studies compiled in this dissertation examine the intersection of mass partisanship and social movements. I hypothesize that certain types of movement actions (i.e.“disruptive”, violent, and cooperative protest) generate greater partisan polarization. I further hypothesize that more disruptive protests decrease tolerance for authoritarianism amongst partisans. Finally, I compare the effects of different types of protest on movement support across partisan groups. That is, I consider the tradeoffs that protest organizers face between generating support and generating partisan-based hostility. I base this study on an emerging social identity approach to mass partisanship, which clearly predicts that extreme protests increase outgroup threat, thus leading to more negative attitudes toward the outgroup. Likewise, the social identity approach to mass partisanship suggests that protest effectiveness should be moderated by the extremity of protest tactics. I situate this study within the social conflict—and associated protests—around global climate change. Using a large, online survey experiment (N = 2764), I expose participants to media coverage of three types of protest events: disruptive and violent, disruptive and non-violent, and non-disruptive non-violent. There is also a fourth control condition. Using a series of regression models, I demonstrate what effects these treatments have on (1) partisan polarization, (2) social dominance orientation, and (3) movement support/opposition.