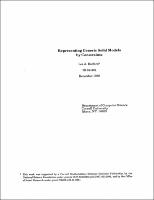 A generic solid is a representation of a class of similar solid objects. This report introduces microCOSM, a constraint language for specifying generic solids. MicroCOSM allows relationships between parts of an object to be expressed as constraints between those parts. As a result, microCOSM can express many more such relationships than current languages for building generic solids. An editor for building and modifying two-dimensional generic solids in microCOSM has been written. This report describes the microCOSM language, the user interface, and implementation of the editor, and concludes with a discussion of some improvements that should be made to the editor.