Measuring the Impacts of Generic Fluid Milk and Dairy Marketing 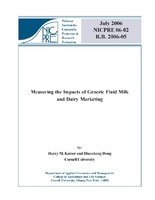 While per capita fluid milk consumption has been declining for decades in the United States, generic fluid milk marketing activities sponsored by fluid milk processors and dairy farmers have helped mitigate some of this decline. We estimate that these marketing efforts have had a positive and statistically significant impact on per capita fluid milk consumption. Specifically, over the 11-year period 1995 through 2005, we estimate that a one-percent increase in generic fluid milk marketing expenditures resulted in a 0.051 percent increase in per capita fluid milk consumption when holding all other demand factors constant. What about the impact on total consumption of fluid milk? From 2001 through 2005, generic fluid milk marketing activities increased fluid milk commercial disappearance by 22.5 billion pounds in total or 4.5 billion pounds per year. Put differently, had there not been generic fluid milk marketing conducted by the two national programs, fluid milk consumption would have been 8.2 percent less than it actually was over this time period. Hence, the bottom line is that the combined efforts of dairy farmers and fluid milk processors to market fluid milk have had a positive and statistically significant impact by partially mitigating declines in fluid milk consumption. In terms of the total dairy demand analysis, the average generic dairy marketing elasticity for the period 1990 through 2005 was 0.074; i.e., a one-percent increase in expenditures for these marketing activities would increase per capita dairy demand by 0.074 percent. Thus, the total marketing effort by dairy farmers and milk processors has had a positive and statistically significant impact on dairy consumption. We calculated a benefit-cost ratio (BCR) for the Dairy Program for the period 2000 through 2005. The benefits of the Dairy Program were calculated as the change in dairy farmers’ net revenue due to demand enhancement from all marketing activities under the Dairy Program. The costs of the Dairy Program were calculated as the difference in total assessment revenues before and after the national program was enacted. The results show that the average BCR for the Dairy Program was 4.33. This means that each dollar invested in generic dairy marketing by dairy farmers would return $4.33, on average, in net revenue to farmers. To make allowances for the error inherent in any statistical estimation, a 95-percent confidence interval was calculated for the average BCR. The confidence interval provides a lower and an upper bound for the average BCR. One can be “confident” that the true average BCR lies within these bounds 95 percent of the time. The estimated lower and upper bounds for the average BCR were 3.70 and 4.95, respectively. This confidence interval demonstrates that one could be 95 percent confident that the true average BCR lies between 3.70 and 4.95. This confidence interval give credence to our finding that the benefits of the Dairy Program’s marketing activities have been considerably greater than the cost of the program.