The Profitability of Agricultural Lending Relationships 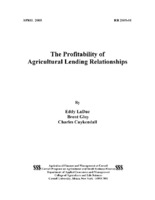 The profitability of agricultural loan relationships was studied using individual relationship data on 1001 borrowers from six lenders with strong agricultural lending reputations. Data were collected for a random sample of borrowers stratified by size and level of risk. Data were collected from three sources. Data on all loans and services used for one full year for each relationship were obtained from the lenders’ electronic and manual files. In addition, the loan officer for each relationship completed a questionnaire and each lender provided institutional specific data. Annual profit, defined as the return to fixed costs and overhead, was determined for each relationship. This included a detailed estimate of all personnel costs attributable to each relationship. Customer lifetime value, estimated as the present value of the expected income stream over 10 years, was simulated for relationships taking into consideration expected movements through size and risk levels as well as business stage. Relationships of all sizes were profitable. Significant economies of size lower the costs of serving large relationships resulting in large profits per relationship although the competitive market passes part of the potential gain on to the farmer in the form of lower rates. Small loans have higher personnel costs, but the rates charged on these loans are high enough to more than offset the higher servicing costs. The interest rates charged medium risk borrowers were sufficiently higher than the rates charged low risk borrowers that medium-risk relationships showed greater profits in the long run (customer lifetime value) as well as on an annual basis. The rate difference more than covered the higher personnel costs and the chance of write-offs. The business stage that was most profitable per relationship was growth. Growing farms had high loan volumes that were only partially offset by lower returns per dollar of loan due to reduced interest rates. Beginning farmers had low loan volumes and high personnel costs making them among the least profitable on an annual basis. However, on a longer run basis, these farms are very likely to go through growth stages, making their profitability similar to stable farms. Non-loan services per se add a small amount to relationship profitability. They also reduce personnel costs by a modest amount. The strong correlation between number of non-loan services and loan volume is a major contributor to the higher profits with more non-loan services. However, the number of non-loan services appears to expand relationship longevity. Relationship longevity reduces personnel costs modestly. The major factor making long-term relationships more profitable is that the average interest rate that is charged is higher. Farmers with long-term relationships appear to be less interest rate sensitive. iv Mid-sized relationships tend to have lower write-offs than either small or large loans. This appears to result from a higher effective level of scrutiny or a willingness of other lenders, including FSA, to assist these borrowers. Personal stage and age have a life cycle relationship to loan volume, but little effect on profit per dollar of loan. Farm type has little effect on profitability except that the predominant type in the region (dairy in this case) has a modestly higher profit.