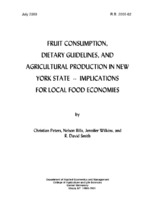 Consuming locally produced foods offers many benefits to consumers, producers and the environment. As a result, local food economies are gaining attention as a means for boosting agriculture and food production in New York State. Concurrent with this interest in local agriculture is a national concern over the health effects of American food consumption patterns and the capacity of agriculture to support nutritious diets. This study merges these areas of inquiry in the context of a nutritionally and economically important agricultural sector, namely New York State fruit production. Three questions are examined in this research. 1) How does New York State fruit production compare with fruit consumption by New Yorkers? 2) How do production and consumption of fruit compare with the recommendations of the U.S. Department of Agriculture food guide pyramid? 3) What implications do these comparisons have for New York State agriculture? These questions were addressed using existing national and state data and valuable methods borrowed from recent USDA Economic Research Service analyses. Annual per capita consumption estimates for the Northeast suggest that New Yorkers consume approximately 180 pounds of fruit per person per year. Based on population estimates, this level of consumption indicates that New Yorkers ate 3.2 billion pounds of fruit in calendar year 1999. In contrast, New York State agriculture harvested an average of 1.5 billion pounds of fruit annually during 1994-1998. After adjusting for processing conversions, post-harvest losses, and inedible portions, the consumable equivalent of this production is 816 million pounds. Furthermore, a commodity-by-commodity comparison indicates that New York produces three products (e.g. fresh apples, processed apples, and processed cherries) in quantities that exceed the estimated in-state demand. As a result, New York produces enough fruit to provide 18 percent of the total fruit consumption plus 256 million pounds of “surplus” of the aforementioned three commodities. Comparisons with the Food Guide Pyramid demonstrate that though fruit consumption in the Northeast is higher than the national average, intake is still well below the recommendations. At 1.9 servings per person per day, fruit consumption would need to increase by 63% to reach the average recommended per capita intake for New York State. The disposition of current consumption is consistent with the Pyramid recommendation that intake be split evenly between the Vitamin C-rich “citrus, melons and berries” and the catch-all category “other fruit”. However, current dietary preferences may not satisfy the ii Pyramid suggestion that consumers choose whole fruits most often since juices comprise more than a third of all fruit servings. New York growers harvest enough fruit to provide 20% of this recommended intake, but production is not evenly distributed between the two subgroups. Almost all in-state production lies in the “other fruits” category (e.g. apples, grapes, and pears) while the production of melons and berries is insignificant relative to the recommended intake. The results of this research suggest both opportunities and challenges for New York State fruit growers and consumers. For most fruits, the in-state market is large relative to current production. In addition, consumption of fruit needs to increase substantially to meet national nutritional goals. Taken together, these findings suggest potential for marketing more fruit, and more New York grown fruit, to New Yorkers. However, the length of the growing season and the predominance of just two crops, apples and grapes, bring into question the ability of New York’s fruit sector to provide the diversity needed to supply a more significant share of the state’s consumption. Moreover, current food preferences may limit sales of in-state produced fruit as over 60% of consumption comes from crops that cannot be grown in New York’s temperate climate. Despite these conflicting patterns, potential exists for growers to target local and regional markets, particularly if they can entice the palates of nutritionally conscious consumers.