The Decision to Enter Consumer Direct initiatives by Supermarket Companies 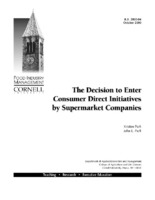 IN THE MID TO LATE 1980S, as computer networks grew and online services were developing, companies including supermarkets started to view home shopping as an exciting, new competitive venture. Now, food retailers are struggling with the possibility of providing a home shopping or consumer direct service for their customers. The decision for a supermarket company with traditional land-based stores to enter the online realm of marketing, however, represents a tremendous commitment. Through the use of a mail questionnaire, this report documents the factors and conditions that would motivate a supermarket company to engage in an e-commerce initiative. While questions evaluated retailer perceptions through the use of Likert scales, the survey also elicited written comments from respondents. A comparison is made between the responses of those retailers already engaged in consumer direct, and those who are not currently engaged in consumer direct. A significant finding of this study is that almost all respondents, 92 percent, most of whom were medium to large grocery chains, believed they will eventually involve themselves in consumer direct. The majority of respondents indicated interest in developing a consumer direct service with a third party, whether a consultant or a partner, although the majority of these preferred to fully own their consumer direct service and consult with a third party consultant. Very few were interested in fully developing a consumer direct program on their own. Motivating factors to entering consumer direct varied somewhat. Companies already providing consumer direct services stated their primary motivating factor for adopting consumer direct was “to develop closer retailer-customer relationships,” while non-providers chose “generating incremental traffic/sales” and “to remain the market leader.” When asked the likelihood of incorporating various methods of operation, consumer direct providers may be willing to expand their methods to incorporate alternative ordering methods for customers without access to online ordering. In addition, providers clearly indicated that they would prefer to fill orders from a centralized warehouse facility as opposed to store shelves. Non-providers, however, would be more likely to pick from a retail store, at least initially. A relief to the complexities of routing deliveries could be to develop scheduled deliveries. And according to survey results, scheduled deliveries may appeal more to companies currently providing consumer direct than those not currently providing consumer direct. Clearly most respondents felt that consumer direct had the potential to effect relations. Yet when asked how, they were by no means certain which if any suggested changes may appear. The most strongly felt attitudes were that “more information sharing regarding product movement” would be likely to occur as well as “consumer direct will create an opportunity for expansion of new products.” This uncertainty provides an open field for manufacturers to define relationships which will assist the development of the consumer direct channel including developing new methods of new product introductions, online product displays, ads and promotions, meal solution development, and more. In return, consumer direct providers will have to be willing to provide product movement information to manufacturers to help them develop these strategies and trade relations.