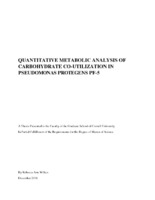 Species of the Pseudomonas genus thrive in various nutritional environments and have strong biocatalytic potential due to their diverse metabolic capabilities. Carbohydrate substrates are ubiquitous both in environmental matrices and in feedstocks for engineered bioconversion. Here we investigated the metabolic network for carbohydrate metabolism in P. protegens Pf-5. The genetic characterization of Pseudomonas protegens Pf-5 was recently completed. However, the inferred metabolic network structure has not yet been evaluated experimentally. We employed 13C-tracers and quantitative flux analysis to investigate the intracellular network for carbohydrate metabolism. Similar to other Pseudomonas species, P. protegens Pf-5 relied primarily on the Entner-Doudoroff (ED) pathway to connect initial glucose catabolism to downstream metabolic pathways. Flux quantitation revealed that, in lieu of the direct phosphorylation of glucose by glucose kinase, phosphorylation of oxidized products of glucose (gluconate and 2-ketogluconate) towards the ED pathway accounted for over 90% of consumed glucose and greater than 35% of consumed glucose was secreted as gluconate and 2-ketogluconate. Consistent with the lack of annotated pathways for the initial catabolism of pentoses and galactose in P. protegens Pf-5, only glucose was assimilated into intracellular metabolites in the presence of xylose, arabinose, or galactose. However, when glucose was fed simultaneously with fructose or mannose, co-uptake of these hexoses was evident, but glucose was preferred over fructose (3 to 1) and over mannose (4 to 1). Despite gene annotation of mannose catabolism toward fructose 6-phosphate, metabolite labeling patterns revealed that mannose-derived carbons specifically entered central carbon metabolism via fructose-1,6-bisphosphate, similarly to fructose catabolism. Remarkably, carbons from mannose and fructose were found to cycle backward through the upper Emden-Meyerhof-Parnas pathway to feed the ED pathway. Therefore, the operational metabolic network for processing carbohydrates in P. protegens Pf-5 prioritizes flux through the ED pathway to channel carbons to downstream metabolic pathways. Elucidation of the constitutive metabolic network in P. protegens is important for understanding its innate carbohydrate processing, thus laying the foundation for targeted metabolic engineering of this untapped Pseudomonas species.