Foraging Behaviour of the Particle Phenomenologist: A Broad Exploration of Physics Beyond the Standard Model 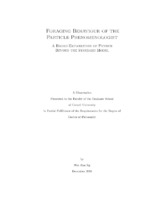 Despite its numerous successes, the Standard Model (SM) of particle physics is known to be incomplete. In this thesis, we explore a variety of topics regarding physics beyond the SM (BSM). In the minimal supersymmetric Standard Model (MSSM), the leptons and Higgs have separate superpartners; however, it is possible to construct a model where the Higgs is the superpartner of one generation of left-handed leptons. In Chapter 2, we explore various implications of this Higgs-as-slepton model, in particular on electroweak precision and neutrino experiments. In Chapter 3, we use the model to explain various excesses reported in leptoquark and W' searches by the CMS experiment in 2014. These excesses were observed in electron but not muon channels, hence suggesting the violation of lepton universality, a hallmark of the model. In Chapter 4, we propose a supersymmetric left-right symmetric (SUSY LRS) model that can explain various excesses reported in W' searches by the CMS and ATLAS experiments around 2014-2015, but at the same time generate a large tree-level Higgs mass, hence resolving the usual issue of the Higgs mass being too small in the MSSM. In the most basic SUSY LRS model, a large Higgs mass also requires a large tan(beta) (the ratio of the two Higgs vacuum expectation values in the model), whereas the excesses seem to favour a smaller value. We resolve this tension by introducing heavy down-type vector-like quarks that mix with the light quarks; a large tan(beta) can now still remain consistent with the excesses. Lepton flavour models based on A4 symmetry are popular because they predict a tri-bimaximal mixing pattern for the Pontecorvo-Maki-Nakagawa-Sakata (PMNS) matrix, often regarded to be in good agreement with experimental measurements. However, recent results from the Daya Bay and RENO experiments have shown that the theta13 angle of the matrix is rather large, contrary to the predicted mixing pattern. We investigate in Chapter 5 whether a model based on the SO(3)-to-A4 symmetry-breaking pattern can accommodate these recent results. The enlargement to SO(3) is intended to motivate the A4 from a UV completion standpoint. We find that contrary to typical A4 models, the SO(3)-to-A4 model does generally predict a large theta13 due to mixing in the charged-lepton sector. In Chapter 6, we present a new mechanism for freeze-out dark matter which we call co-annihilation. This differs from most freeze-out mechanisms in that depletion is driven not by Boltzmann suppression, but by out-of-equilibrium decay that eventually "switches off''. Such a model is hard to probe using direct detection and collider production experiments, but should present enhanced indirect detection signatures. Hydrogen-antihydrogen (H-Hbar) oscillations are forbidden in the SM and hence represent signs of new physics. In the interstellar medium (ISM), any H atom that oscillates into Hbar may subsequently undergo annihilation with other atoms, producing gamma-rays that can be detected in astronomical surveys. While a bound on these oscillations was originally derived by Feinberg et al., we re-evaluate the bound in Chapter 7 using a more comprehensive theoretical framework, a multiphase description of the ISM, as well as recent gamma-ray data from the Fermi Large Area Telescope.