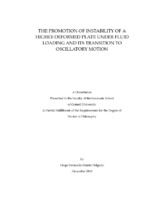 Plates and membranes interacting with incoming fluids are canonical problems exhibiting rich physics concerning the onset of flutter instabilities. Such instabilities, once considered a failure state, are now exploited for new functionalities such as adaptive flow control, drag control, energy harvesting, and so forth. We present the dynamics of the fluid-structure interaction problem of a thin elastic plate buckled into a second mode-like deformation created by an external net compressive force. The deformed plate is immersed in an incompressible flow and is studied without the presence of oscillatory motions, and subsequently, in flow speeds where large oscillations are present. The presence of the deformation in the plate is intended to promote its oscillatory behavior at low flow velocities (i.e., early onset of flutter), increasing the potential for energy harvesting as well as the operational range of such devices. Mathematically, we propose a description of the buckled plate considering that the amplitude of the deflection is greater than the thickness of the plate. First, we present the derivation of the equilibrium equations based on a heavy elastica model, and show the numerical solution of the nonlinear system of first-order equations for the static case. The results predict well the deformation (modes one and two) and point towards the existence of higher order deformation modes. Second, we show the derivation of dynamic terms and coupling with a uniform incoming flow based on slender body theory. A linear stability analysis of the coupled mathematical model provides insights on the contribution towards a reduced critical flow velocity, $U_c$, from the combined destabilizing influence of the net compressive force and centrifugal forces, which allow for lower flow velocities to start the plate's large oscillatory movements. As we expect flow separation to occur due to adverse pressure gradients set up by the plate's deformation, there is a need for either a more elaborate coupling or an experimental approach to account for such flow separation, which is one of the main mechanisms involved on the onset of large oscillatory motions. Experimentally, we subject the deformed plate to an incompressible flow to induce oscillations, and with the aid of image-based edge detection and acoustic Doppler velocimetry, find three states of motion: a) a buckled plate with weak perturbations below $U_c$, b) a plate with large oscillatory motions appearing as a superposition of traveling and standing waves above $U_c$, showing predictable dominant frequencies, and c) a plate with spatially-chaotic oscillatory motions above a transitional flow velocity ($U_t$), displaying a broad frequency spectrum. We find an early onset of flutter of the deformed plate compared to flag-type configurations (lower $U_c$). The main physical mechanisms contributing to the reduced $U_c$ are the destabilizing action of the compressive force, a deformed locally-stable plate, and an unsteady flow field resulting in non-zero pressure drag and lift, all existent prior to structural oscillations. Finally, based on particle image velocimetry, we present further experimental evidence of one mechanism contributing to the early onset of flutter: the occurrence of an unsteady flow field prior to oscillatory motions. We show a marginally dynamically stable plate progressively deforming as a function of flow regimes, with high production of vorticity and flow separation due to adverse pressure gradients, which renders the assumptions of irrotationality and those that lead to boundary layer equations inapplicable, as well as creating a non-zero pressure drag and lift. The unsteady flow field shows vorticity being diffused from boundary layers, advected out and downstream, creating unsteady ``ejection'' events. As critical flow velocity is approached, such events produce a suction high enough to compensate for the plate's restoring forces and weight, a reduction/increase in the magnitude of lift follows for the positive/negative phase, where the sign of the phase indicates to leading edge slope of the mode two deformation in the plate. These changes, by virtue of the non-linear boundary conditions (i.e., external forcing as a function of deformation), induce a change in deformation mode (dynamic mode branching or ``snap-through''), and consequently, large oscillatory motions. Such behavior is also present on a dynamically unstable plate, albeit flow separation is present to a lesser degree (i.e., recirculation zones are smaller).