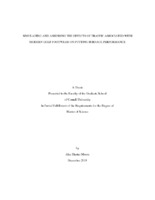 Concentrated foot traffic is a significant source of stress for natural turfgrass systems. Downward foot pressure can increase soil bulk density and reduce turfgrass shoot density. Golf putting surface traffic has attempted to be simulated using specialized equipment or with humans moving in a linear walking path or side-stepping. These methods often disregard the unique movement associated with actual traffic patterns, especially localized around the hole location. Concern regarding traffic stress associated with specific golf footwear has increased due to dramatic design changes made to increase traction and stability during a golf swing. An unintended consequence of increasing golf footwear traction and stability has been a perceived increase in foot traffic stress and disruption of playing conditions on putting surfaces. Studies were conducted in 2016 and 2017 to develop a standard method of applying a known volume of foot traffic associated with playing golf and utilize this method to assess performance of two golf playing surfaces. To achieve a rapid, uniform, quantifiable rate of traffic a walking pattern designed to impose concentrated foot traffic at known rates and volumes was investigated during the 2016 and 2017 growing seasons. Data collected on key surface performance parameters at the hole location indicated differences between playing surface types. Golf footwear traffic resulted in a significant increase in clipping yield independent of playing surface type. Putting surface performance declined proportionally with traffic volume as a result of reductions in fractional green canopy cover, ball roll distance, and visual turf quality.