Dna Replication And Transcription In The C. Elegans Embryo 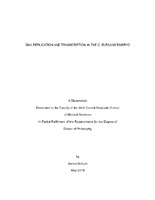 Animal embryogenesis represents a cascade of genetically encoded events that transform a single-celled zygote, composed of cytoplasm and nuclei from two haploid gametes, into a fully formed organism. The “totipotent” zygote is the only cell with the ability to divide and produce cells of all differentiated types; however, the manner in which the embryonic genome is replicated, packaged, and transcribed during the regulatory transitions of animal development remain elusive. To further our understanding of early animal development, I developed integrative deep sequencing and bioinformatics approaches to profile the genomic landscape of embryogenesis in the nematode Caenorhabditis elegans. Comparison of DNA replication, nascent RNA transcription, and active histone modification profiles from synchronized populations of staged worm embryos revealed a striking model of genome organization, shaped by the combined influence of DNA replication origin specification and the developmental transcriptome. We find that the embryonic transcriptome and chromatin modification landscape are largely defined by DNA replication origins and the constitutive transcription of housekeeping genes arranged within operons. We observe a dramatic remodeling of gene expression relative to DNA replication origins during the shift from the proliferation to the differentiation phase of embryogenesis—analysis of embryonic chromatin states and nascent RNA transcription patterns reveal that the morphogenesis gene expression program in differentiated cells is coupled to the de novo remodeling of histone modifications and a switch to pervasive RNA polymerase elongation. Our data suggest a novel mechanism by which a small regulatory RNA pathway acting in the nucleus is involved in coordinating the switch between the germline/embryonic gene expression program and the somatic differentiation program. This pathway centers on an essential C. elegans Argonaute, CSR-1, and its associated 22-nt small RNAs that mediate CSR-1 interaction with the nascent embryonic transcriptome. CSR-1 is known to balance the level of maternal RNA transcripts that support early embryogenesis through selective slicing of endogenous mRNA transcripts during germline development. Our model proposes that CSR-1 activity from the adult germline is inherited in the early embryo and that its gradual titration from somatic cells during early embryonic cell divisions helps gradually transition the embryo from a program of rapid proliferation to one of tissue-specific morphogenesis. The work described herein reveals the influence of DNA replication and transcriptional regulation on the spatiotemporal dynamics of C. elegans embryogenesis and lends insight into the evolutionary forces which shape metazoan genome structure and function.