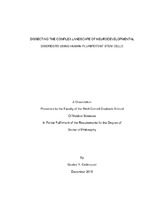 Neurodevelopmental disorders (NDDs), which affect 1 in 6 children in the United States, are a group of disabilities caused by abnormal growth and function of the brain. Despite this prevalence, elucidating causative disease mechanisms has remained challenging. This is in large part due to current limitations in experimental modeling of NDDs. Two factors in particular that present challenges for disease modeling are 1) the cellular diversity of brain development and 2) the genetic diversity of disease risk. Human pluripotent stem cells (hPSCs) have great potential for modeling NDDs, and may be well suited to address the challenges of cellular and genetic diversity for the following reasons. First, hPSCs can generate diverse cell types of the human body, thus providing unprecedented access to disease tissue. Second, hPSCs can organize cellular diversity into functional tissue structures through the use of three-dimensional culture systems called organoids. Third, hPSCs can be engineered to harbor any type of gene mutation, including both monogenic and polygenic genetic risk variants. In this dissertation, I explore how the unique properties of hPSCs can be harnessed to dissect the complex cellular and genetic landscapes of NDD risk. First, I collaborate to develop a forebrain organoid culture model of ZIKA virus induced microcephaly and find that ZIKA virus infection inhibits growth and degrades the local architecture of forebrain progenitor zones. We further identify small molecules that inhibit ZIKA virus infection of SOX2+ forebrain progenitors. While organoids recapitulate the cellular diversity and microarchitecture of progenitor zones, and have thus been successful at modeling disorders of tissue growth, they do not recapitulate the overall regional organization of the brain, in which each discrete brain area arise in a stereotyped anatomical location. I therefore next developed a method to trigger spatial patterning in organoids, thus generating topographically organized brain tissue that contains at least five major forebrain subdivisions. Using this system as a tool to study drug toxicity during fetal brain development, I find that cholesterol synthesis-inhibiting drugs, including statins, perturb sonic hedgehog-dependent spatial patterning and growth. Finally, I develop an hPSC-based multiplex analysis platform for the simultaneous functional characterization of many disease-associated mutations. This approach is applied to model autism, a disorder of social isolation in which hundreds of distinct mutations contribute to diverse clinical outcomes. Multiplex analysis of 27 high-confidence, early developmental, de novo autism mutations in hPSC-derived prefrontal cortex tissue identifies that autism mutations commonly perturb cortical neurogenesis and WNT signaling. These phenotypes were used to segregate mutations into distinct subgroups. Autism patients that fall into distinct subgroups exhibit average differences in clinical parameters of communication skills and language development. Taken together, these findings demonstrate that hPSCs are a powerful and general platform to disentangle primary disease pathways from the complex cellular and genetic environments that give rise NDDs.