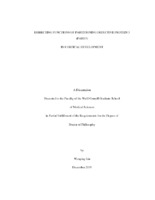 Proper organization and orderly mitosis of radial glial progenitors (RGPs) drive the formation of a laminated mammalian cortex in correct size. However, the molecular underpinnings of the intricate process remain largely unclear. By generating various genetic engineered mouse lines, I investigated the roles of one ancient polarity protein, partitioning defective protein 3 (PARD3), in cortical development. In the neocortex, the birthplace of excitatory neurons, my mutant analysis showed that RGP behavior and cortical development are controlled by temporally distinct actions of PARD3 in concert with dynamic HIPPO signaling. RGPs lacking PARD3 exhibit developmental stage-dependent abnormal switches in division mode, resulting in an initial over-production of RGPs largely located outside the ventricular zone at the expense of deep-layer neurons. Ectopically localized RGPs subsequently undergo accelerated and excessive neurogenesis, leading to the formation of an enlarged cortex with massive heterotopia and increased seizure susceptibility. Simultaneous removal of HIPPO pathway effectors YAP and TAZ suppresses cortical enlargement and heterotopia formation. These results define a dynamic regulatory program of mammalian cortical development and highlight a progenitor origin of megalencephaly with ribbon heterotopia and epilepsy. In the medial ganglionic eminence/ preoptic area (MGE/PoA), where most cortical interneurons are born, PARD3 deletion impairs the asymmetric division of RGPs in a temporal-distinct fashion as well, and results in the overproduction of early-born somatostatin (SOM) -expressing interneurons at the expense of constantly generated parvalbumin (PV) -expressing interneurons. Moreover, by analyzing one of the few well-established interneuron subtypes, chandelier cells, I found that the disruption of asymmetric division in MGE/PoA RGPs by PARD3 deletion leads to a significant reduction in the generation of chandelier cells. The results together suggest a putative link between division mode and interneuron subtype specification.