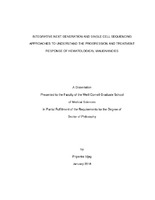 Despite recent advances in cancer therapy, most hematological malignancies remain incurable. Mantle cell lymphoma (MCL), a B-cell non- Hodkin’s lymphoma, and the myelodysplastic syndromes (MDS), a cancer of the bone marrow resulting in peripheral blood cytopenias and increased leukemia risk, have a median survival rate of 5 years. Standard of care for both elicits variable responses in patients, and even patients who initially respond often acquire resistance. The development of improved therapeutic strategies is hindered by the limited understanding of molecular mechanisms underlying innate and acquired resistance. Here, we investigate these mechanisms using next generation sequencing approaches in MCL and MDS in the context of specific treatment regimens. We show that in MCL, resistance to combination of palbociclib, a CDK4/6 inhibitor, and bortezomib, a proteasome inhibitor, in a phase I clinical trial was correlated with copy number variations, and altered gene expression, which were identified through a longitudinal approach integrating exome and transcriptome sequencing of purified MCL cells from lymph node biopsies. Notably, we identified a loss of type I interferon genes in non-responders that may cause innate resistance in these patients, and a relapse-specific hemizygous loss in chromosome 13q in an initially responding patient that may reflect an alternate mechanism of resistance. In MDS, we used single cell RNA-sequencing to evaluate transcriptional heterogeneity in hematopoietic stem cells pre-/post-therapy with decitabine, a hypomethylating agent. To investigate dysregulated splicing at the single cell resolution, we developed DISCO, a single cell splicing analysis platform, and identified heterogeneous altered splicing of immune genes and ribosomal proteins in spliceosome-mutated cells. Subsets of ribosomal proteins were differentially spliced and down-regulated in MDS cells, with even greater dysregulation detected in non-responders. Up-regulated pathways include p53 signaling and myeloid differentiation. Heterogeneous transcriptional patterns defined distinct stem cell states, and state dynamics pre- to post-therapy highlighted differentiating features (ex. CTBP1 expression) of populations likely driving resistance. Overall, these results leverage the latest sequencing technologies and new computational methods to study purified MCL and MDS patient cells during treatment, identify important mechanisms regulating pathogenesis and therapy response, and offer opportunities for developing a precision medicine framework in treating these diseases.