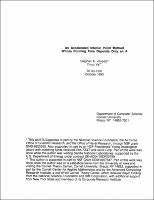 We propose a "layered-step" interior point (LIP) algorithm for linear programming. This algorithm follows the central path, either with short steps or with a new type of step called a "layered least squares" (LLS) step. The algorithm returns the exact global minimum after a finite number of steps-in particular, after $O(n^{3.5}c(A))$ iterations, where $c(A)$ is a function of the coefficient matrix. The LLS steps can be thought of as accelerating a path-following interior point method whenever near-degeneracies occur. One consequence of the new method is a new characterization of the central path: we show that it composed of at most $n^2$ alternating straight and curved segments. If the LIP algorithm is applied to integer data, we get as another corollary a new proof of a well-known theorem by Tardos that linear programming can be solved in strongly polynomial time provided that $A$ contains small-integer entries.