Pseudozeros of Polynomials and Pseudospectra of Companion Matrices 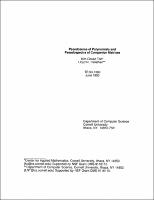 It is well known that the zeros of a polynomial $p$ are equal to the eigenvalues of the associated companion matrix $A$. In this paper, we take a geometric view of the conditioning of these two problems and of the stability of algorithms for polynomial zerofinding. The $\epsilon$-pseudozero set $Z_{\epsilon}(p)$ is the set of zeros of all polynomials $\hat{p}$ obtained by coefficientwise perturbations of $p$ of size $\leq \epsilon$; this is a subset of the complex plane considered earlier by Mosier, and is bounded by a certain generalized lemniscate. The $\epsilon$-pseudospectrum $\Lambda_{\epsilon}(A)$ is another subset of C defined as the set of eigenvalues of matrices $\hat{A}=A+E$ with $||E|| \leq\epsilon$; it is bounded by a level curve of the resolvent of $A$. We find that if $A$ is first balanced in the usual EISPACK sense, then $Z_{\epsilon||p||}(p)$ and $\Lambda_{\epsilon||A||}(A)$ are usually quite close to one another. It follows that the Matlab ROOTS algorithm of balancing the companion matrix, then computing its eigenvalues, is a stable algorithm for polynomial zerofinding. Experimental comparisons with the Jenkins-Traub (IMSL) and Madsen-Reid (Harwell) Fortran codes confirm that these three algorithms have roughly similar stability properties. Key words: polynomial zeros, comapnion matrix, pseudospectrum.