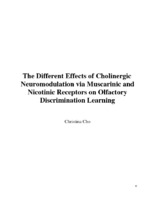 Cholinergic neuromodulation has long been associated with various neural functions, such as learning and memory. In particular, cholinergic modulation in the olfactory bulb has been shown to affect olfactory discrimination learning, and there are two different types of cholinergic receptors, muscarinic and nicotinic. The effects of cholinergic input into the olfactory bulb via muscarinic receptors differ from those via nicotinic receptors. The present study tests to what extent behavioral conditioning and the activation of muscarinic and nicotinic receptors interact and compensate for each other in modulating the strength and specificity of an odor-reward association. In the study, the mice were infused with either a muscarinic antagonist, a nicotinic antagonist, or a saline vehicle control directly into the olfactory bulb, and then were trained over either 4, 8, or 12 trials to associate a given odor with a reward by digging for a reward in scented sand. Digging times measured in the test trials showed that blocking muscarinic receptors slowed down learning across all test odors while blocking nicotinic receptors impaired discrimination between perceptually similar odors by affecting their odor representations, independently of learning. Moreover, extended periods of learning allowed mice to compensate for lack of muscarinic, but not nicotinic, receptor activation.