The Hemlock Woolly Adelgid, A Pest We CAN Manage! 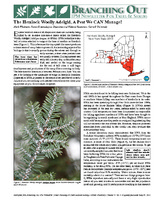 Cold temperatures have been documented as responsible for killing significant numbers of hemlock woolly adelgid (HWA) and have been thought to be regulating its march northward in New England. However, research indicates cold tolerance is a genetically linked trait so progeny of the survivors will also be cold tolerant. Data suggests HWA populations in colder areas are indeed becoming more cold tolerant than those in warmer locations. Given that the winter’s cold weather wasn’t enough to eliminate all the hemlock woolly adelgids, what options do we have to control this pest? There are two pesticides currently being used for HWA in New York, Imidacloprid and Dinotefuran.