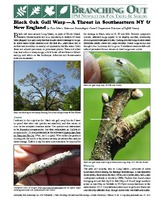 Black oak trees around Long Island, in parts of Rhode Island, eastern Massachusetts and eastern NJ have been plagued by a gall wasp that has caused severe damage to twigs. In some cases repeat attacks over the last few years have led to decline and mortality (or nearly) of apparently healthy trees. Often these are valued specimens in prominent places. Trees not killed may lose a few to many twigs, which break off and leave a thinner canopy and debris on the landscape. The species was determined to be Bassettia ceropteroides, but then reclassified as Callirhytis ceropteroides