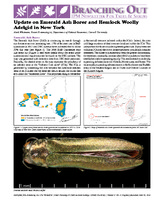 The Emerald Ash Borer (EAB) is continuing its march through the New York forests at an ever increasing rate. Treatment BMP’s for EAB have been well established with Emamectin benzoate the most commonly used insecticide and now two formulations are available. Despite heavy mortality (95% or more) during the cold winters of 2013/14 and 2014/15, Hemlock Woolly Adelgid (HWA) populations bounced back in spring of 2015, even in the coldest parts of the state. Treatment with a basal bark spray tank mix of Safari and imidacloprid (2ee) has proven to have a rapid impact on HWA, multi-year efficacy, and is efficient to apply. Long term management rests with the successful implementation of biological control -A predatory beetle from the Pacific Northwest (PNW), Laricobius nigrinus, that is showing promise and a Silverfly, another common predator from the PNW.