An Update on Invasive Adelgids in New York 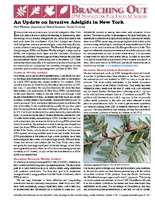 The Hemlock Woolly Adelgid, Adelges tsugae (HWA) and Balsam Woolly Adelgid, Adelges piceae (BWA) are originally from Japan and the Caucasian Mountains respectively, and have become huge problems because they left their natural enemies behind when introduced to the eastern US. These insects reproduce asexually with explosive population buildups that are responsible for widespread tree mortality throughout the east coast and pose a continuing management problem in New York