The Application of Symbolic Mathematics to a Singular Perturbation Problem 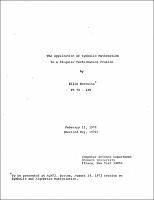 A basic technique for the numerical solution of ordinary differential equations is to express them as a singular perturbation problem. However, computational studies indicate that the resultant matrix equations which must be solved are often highly ill-conditioned. In this paper a particular singular perturbation problem which was shown to be ill-conditioned using 8 numerical methods is solved by symbolic techniques. These techniques lead both to an analytic proof of the solution plus to the precise knowledge of the asymptotic behavior of the solution vector as it converges. The difficulties encountered in solving the problem symbolically are discussed. Then several conclusions are drawn about the merits of a symbolic versus a numeric approach when applied to the solution of linear systems. Finally some advice and warnings to both the user and the designer of symbol manipulation systems are given concerning their goals and expectations when large matrix equations are to be solved.