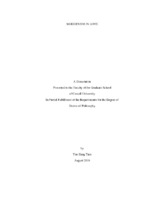 The present study identifies a transformation in the delineation of love in the first half of the twentieth century. Concentrating on the work of D. H. Lawrence, Mina Loy, Elizabeth Bowen and Graham Greene, I argue that romantic love arises in these authors’ work not in the conventional pattern that constitutes the "love plot" (from encounter and seduction to crisis and reconciliation), but when the pattern is defied by certain insistent words or figures that preserve the enigma of love as a shock of not knowing. Rather than assimilate love to the rhetoric of self-discovery that the closure of a love plot usually implies, then, the texts I study ask what it means when the experience of love, as an encounter with the limits of self-understanding, shatters the coherence of the text as a quest for personal and historical meaning. Writing against the critical tendency to dismiss love as an outmoded topic in the twentieth century, this dissertation exposes how love, as a seemingly personal experience, surprisingly provokes a variety of epistemological crises in the social realm, from the birth of individuality in Lawrence to feminism in Loy, from the wartime question of responsibility in Bowen to the theological question of redemption in Greene. Despite the unrelenting demystification of love in the polemics of this period, modernist authors are intensely, passionately and often exhaustingly preoccupied with reinventing the language of love. While Lawrence and Loy (both admirers of F. T. Marinetti at some point) deploy the vocabulary of futurism to unleash the potential of deep connectivity while maintaining a sense of selfhood in a love relation, Bowen and Greene (both volunteers during the aerial bombardment of London in WWII) explore how the unprecedented violence of the war generates at once a global sense of paranoia and persistence that turns love, surprisingly, not so much into a self- destruction as a witness to destruction. Far from depreciating love as a serious topic of discussion, these authors instead ask how the resonant language of twentieth-century modernity might renew our understanding of this ageless subject: not only what it is as an ontology but also what it can do as a performance. In engaging the "performative" quality of my literary texts, my dissertation argues that love may reveal its ethical possibility only insofar as it resists the formal (or perceptual) constraint of the text; it is in attending closely to the way in which the formal quality of literature is marred by this resistance, I argue, that we may begin to trace the force (and form a different story) of a radical self-transformation, or of multiplicity, that love occasions in its rhetorical capacity.