Ends, Norms, and Representations: Why ask "Why?" in Biology? 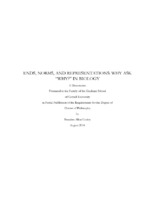 In this dissertation I address three philosophical problems in the philosophy of biology united by the underlying, and interlocking, issues of the explanatory role of teleological, normative, and representational concepts in biology. In the first chapter, I argue that extant accounts of functions have foundered on a problem I dub the Dysfunction Dilemma, and I offer a way to move forward. Functions are of philosophical interest because the concept plays an important explanatory role in biology, and other sciences, but is apparently teleological and normative –an item’s function is its end, purpose, or goal, and a dysfunctional item is one that fails to realize a particular norm, performance of its proper function. Extant accounts of function do not successfully capture both its explanatory import and its normative and teleological character, either painting dysfunction as conceptually incoherent or painting functions as epiphenomenal. I diagnose the source of the dilemma and offer an account of functional explanation which avoids it. In the second chapter, I defend the idea that genes, like words or concepts, have intentionality or representational/semantic content. First, I argue that while the standard motivation for this idea is mechanistic analogies between molecular mechanisms and digital computation, Ernst Mayr, one of the architects of the modern synthesis in biology, has provided an alternative and more defensible justification for taking the idea seriously. Parallel to the standard case for representational and computational theories of cognition, Mayr’s justification rests on the need to invoke representations to explain end-directed processes. I then put Mayr’s argument to work answering three kinds of objection to the idea that genes are representational: 1) Genetic representations are causally or explanatorily inert, 2) Genetic processes are too complex and context sensitive to be captured by representational concepts, and 3) Details of molecular biology undermine representational conceptions of genes. In the final chapter, I develop a historical and philosophical interpretation of Ernst Mayr’s distinction between proximate and ultimate causes and its relation to Niko Tinbergen’s "four questions." Both frameworks have been influential in the biological study of behavior and are typically presented as a single framework, with Mayr’s proximate-ultimate distinction corresponding to one of two axes dividing Tinbergen’s four questions. I argue that this interpretation misrepresents Mayr’s and Tinbergen’s philosophical positions. I offer a positive account of both frameworks and their relation to one another, and I argue that contrary to many critics, Mayr’s proximate-ultimate distinction, when properly interpreted, does not present a barrier to the project of integrating biological work on Tinbergen’s four questions.