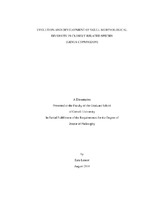 Understanding the origins of phenotypic diversity is fundamental to the study of evolution. While much is known about the role of selection in sorting variation, relatively less is known about how phenotypic variation is produced. In this thesis I investigate the genetic and developmental sources of craniofacial phenotype in a radiation of three ecologically diverse species of pupfishes (genus Cyprinodon) endemic to San Salvador Island, Bahamas. Species differ primarily in oral jaw morphology, and phenotypic differences arise during post-hatching growth resulting from modifications to the relative growth rates of oral jaw bones (Chapter 1). I provide an embryonic staging series for Cyprinodon (Chapter 2), and use RNA-seq to screen for genes differentially expressed between species at 4 developmental stages (Chapter 3). Fully understanding how modifications at the level of gene expression (Chapter 3) may influence modifications to growth rates at an organismal level (Chapter 2) requires study of the processes operating at the cellular and tissue levels of biological organization. Patterns of cell proliferation differ between species of pupfishes and may be a way that genetic changes have phenotypic consequences on craniofacial morphology (Chapter 4). Taken together, these studies show how understanding the evolution of phenotypic diversity requires investigating the generative processes responsible for producing phenotypic variation at multiple levels of biological organization.