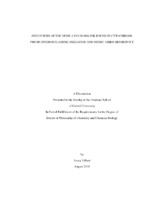 This thesis investigates the role of covalent heme modifications in the oxidation of NH2OH. The first chapter examines the production of N2O under anaerobic conditions via the oxidation of NH2OH by cyt P460 N. europaea. Under aerobic conditions, cyt P460 N. europaea only produced sub stochiometric amounts of NO2−. This is in direct contrast to previous literature, which stated the oxidation of NH2OH by cyt P460 resulted in the production of NO2−. This chapter also discusses how the discovery that cyt P460 does not oxidize NH2OH to NO2− prompted further examination on the product of NH2OH oxidation by HAO. The next chapter begins with identification of the 6-coordinate (6c) {FeNO}7 species, a key intermediate in the NH2OH oxidation pathway of cyt P460.33 This key intermediate also led to further discussion on the role of the cross-link in catalysis. The mechanism for N2O production by cyt P460 necessitates a 6c {FeNO}7 and a {FeNO}6 as intermediates. The 5-coordinate (5c) {FeNO}7 species was shown to be catalytically incompetent.29 Treatment of FeII cyt P460 with a NO donor forms the 6c {FeNO}7 species that will slowly decay to the 5c {FeNO}7 species. However, removal of the cross-link now generates a fast 6c to 5c conversion that is now NO dependent. The dependence on NO for His dissociation after the formation of the {FeNO}7 species is similar to other heme NO signaling proteins. Therefore, the presence of the cross-link is necessary in order to avoid the 5c {FeNO}7 dead end species. However, the cross-link deficient variant does not exhibit NH2OH oxidase activity. Therefore, the presence of the cross-link must be important in activating the heme towards NH2OH oxidation, this question is addressed in the next two chapters of the thesis. Chapter 4 first analyzes whether the difference in reactivity comes from the degree of ruffling in the P460 center. The degree of heme ruffling has been proposed to direct the reactivity of the P460 cofactor.35 The degree of ruffling has been shown to modulate reduction potential, where a more ruffled heme exhibits a lower more negative reduction potential.35 Ruffling has also been proposed to increase the stability of the {FeNO}6.36 Chapter 4 therefore addresses if the cross-link deficient variants lose NH2OH oxidase activity due to the formation of a more planar heme site. Chapter 5 further examines the differences in reactivity of the cross-link deficient variant compared to wild-type (WT) cyt P460. This analysis suggests that the role of the cross-link may be to generate a radically different heme center that is important in directing its ability to carry out direct substrate bound oxidation.