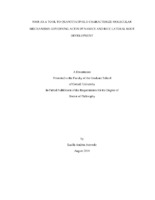 Protein-Protein interactions are fundamental for varied biological processes. These interactions are governed by different forces between the proteins, which result in a wide range of interaction strengths. Nuclear Magnetic Resonance (NMR) is an atomistic technique commonly used to understand protein-protein interaction mechanisms, especially weak interactions (KD>µM). In this work, two different biological systems are studied by NMR. The first system that was studied is related to two proteins involved in cytoskeleton dynamics and cell migration, and the second is related to an enzyme-substrate interaction that controls a gene transcription regulation circuit. In the first case, a novel mechanism for protein-protein interaction between the Ena/VASP Homology 1 (EVH1) domain of the actin polymerize regulator Vasodilator-Stimulated phosphoprotein (VASP) and the cytoskeleton protein Zyxin was determined. This interaction is important for cellular shape, cell motility and stress fiber repair. This study presented a model for a mechanism of action where phosphorylation can act as a stoichiometric switch and can explain the importance of the phosphorylation cycle in the localization of VASP by Zyxin. The second protein-protein interaction focuses on the prolyl isomerase enzyme LRT2 (lateral rootless2) acting on the repressor protein OsIAA11. This interaction is critical for lateral root initiation in rice. The mechanism of action for this process is through the regulation of the cis-trans isomerization of the well conserved 104Trp-Pro105 peptide bond in OsIAA11. OsIAA11 plays a role in repressing gene expression in a manner dependent on the amount of the phytohormone Auxin. At high Auxin concentration, OsIAA11 is specifically degraded in the cis conformation of the 104W-P105 peptide bond. Thus, studies of LRT2 catalysis of OsIAA11 isomerization are essential to understand this fundamental biological process. In this dissertation, the microscopic equilibrium and rate constants of the LRT2 enzymatic cycle acting on OsIAA11 were determined by NMR lineshape analysis and validated by independent NMR exchange measurements. We found that LRT2 is optimally tuned for supplying maximum OsIAA11 in the cis isomer into a slower degradation pathway. Moreover, these studies predict that the catalyzed exchange rate is insensitive to concentrations of OsIAA11 at cellular conditions but scales lineally to the LRT2 concentration.