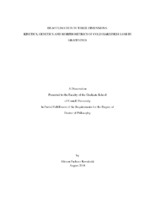 Bud dormancy and cold hardiness are critical adaptations for surviving winter cold stress for temperate perennial plant species. Grapevines (Vitis spp.) resist cold through supercooling of water in their buds, and the level of cold hardiness is largely controlled by air temperature. Deacclimation during the spring is a determinant of timing of budbreak, and is one of the most critical periods for cold hardiness damage. The objective was to characterize the process of cold hardiness loss, or deacclimation, in grapevine buds. Several experiments were conducted to provide insights on deacclimation rates and effects on budbreak; location, distribution, propagation, and damage due to intracellular ice formation; and genes involved in the aforementioned processes. Cold hardiness of buds was determined using differential thermal analysis; genetic regulation was studied using RNA-Seq; and freezing imaging and microtomography was performed using synchrotron X-ray phase contrast imaging. Deacclimation rates (kdeacc) in several genotypes demonstrated a dependency on chill accumulation (dubbed deacclimation potential; Ψdeacc) that followed a logistic behavior. The curve describing the response of kdeacc to temperature followed an exponential at low (<12 C) and logarithmic behavior at high (12 C) temperatures. Budbreak phenotype appears tightly linked to kdeacc responses, and therefore Ψdeacc is a good quantitative parameter to determine dormancy transitions. Abscisic acid (ABA) synthesis and signaling appear to be upstream of cold hardiness loss, and ABA-induced aquaporins may be directly related to cold hardiness levels. CBF homologs were not differentially expressed during deacclimation, although other DREB homologs were. The roles of phospholipase D and stilbene synthase should be further explored in the deacclimation process. X-ray phase contrast imaging was not able to resolve ice within grapevine buds. However, movement of tissues due to changes in water density associated with a thermocouple for temperature measurement provided information to identify the center of the bud (primary shoot) as the first portion to freeze. Microtomography using x-ray phase contrast imaging demonstrated that an increase in bud volume is correlated to the loss of hardiness, but major tissue expansions occur after cold hardiness is lost.