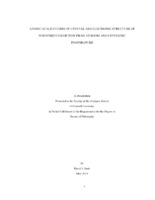 Scanning transmission electron microscopy (STEM) is a powerful tool that continues to advance our understanding of materials. As macroscopic properties of materials are closely tied to their microscopic structure, the ability to directly observe with atomic resolution can elucidate many questions that may otherwise remain enigmatic. In perovskite oxides, slight changes in structure or bonding environment can lead to drastic changes in electronic properties. In particular, when realized in thin film heterostructures, oxides have shown to exhibit various exotic functionalities that are not observed in their bulk constituents. To preserve these properties, controlling the quality of thin films and their interfaces is critical. Here, STEM in conjunction with electron energy loss spectroscopy (EELS) is used to optimize the design and growth of oxide thin films. Furthermore, STEM-EELS is performed at cryogenic temperature to study low temperature phase transitions that occur in oxides. The employment of the water-soluble oxide Sr3Al2O6 can enable fabrication of freestanding oxide membranes decoupled from the substrate. However, its unique mechanical and chemical properties can also lead to instabilities during growth of other oxides atop. Atomic-resolution STEM-EELS reveals that the crystal structure of Sr3Al2O6, and therefore its physical properties, is fully disrupted due to a chemical reaction triggered by the subsequent growth of La0.7Sr0.3MnO3. However, with the insertion of an ultrathin SrTiO3 barrier layer, the inherent structure of Sr3Al2O6 can be preserved, thus enabling its wider application. In addition, results from STEM-EELS show the emergence of defects at the interfaces between Sr3Al2O6 and other oxide materials that lead to formation of a defect network. With this, cations are observed to diffuse out from the intended film region and to segregate at interfacial defects, degrading the film’s stoichiometry and its electronic properties. By suppressing the diffusion of cations, the film’s properties are restored. Superconductivity in ruthenates has gathered much interest. However, Sr2RuO4 is known to be a highly disorder-sensitive superconductor. Here, using annular bright-field (ABF) and annular dark-field (ADF) STEM, we probe both superconducting and non-superconducting Sr2RuO4 films. Surprisingly, the superconducting film is observed to have variations in the number of perovskite cells confined within the (Sr-O)2 rock-salt layers, which is also accompanied with the nucleation of vertical (Sr-O)2 layers. The non-superconducting film, on the other hand, exhibits a uniform Ruddlesden-Popper structure. This likely indicates the role of vertical (Sr-O)2 layers in effectively accommodating local non-stoichiometries in the film. Furthermore, in the related ruthenate family CaRuO3, it is observed that depositing these films under excess ruthenium is critical. Ruthenium deficiency during growth leads to nucleation of vertical (Ca-O)2 Ruddlesden-Popper faults. As excess ruthenium flow is allowed, stoichiometric CaRuO3 films are synthesized and are observed to grow at a tilted angle with respect to the underlying substrate. This tilt causes distortions of the oxygen octahedra in the CaRuO3 film which may affect the film’s properties. Room temperature measurement are important, however, a range of electronic and magnetic phases in oxides emerge at low temperatures. Here, we demonstrate that charge-ordering (CO) in Nd0.5Sr0.5MnO3 thin films can be revealed with atomic-resolution using cryogenic STEM-EELS. In addition to direct mapping of the lattice response in the CO state with STEM, EELS is used to elucidate the charge modulation structure. Existing models of checkerboard ordering are confirmed, albeit with partial charge segregation compared to the previously suggested full ionic picture.