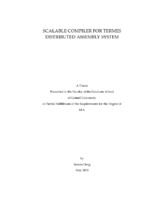 The TERMES system is a robot collective capable of autonomously constructing user-specified structures in three dimensions. The compiler is one of the key components that convert the goal structure into a directed map which an arbitrary number of robots can follow to perform decentralized construction. In previous work, the compiler was limited to brute force search which scales poorly with the size of structure. The purpose of this research is to enhance the scalability of the compiler so that it can be applied to very large-scale structures. Correspondingly, a new scalable compiler is presented, with the ability to generate directed maps for structures with up to 1 million stack of bricks. We further recast the old compiler as a constraint satisfaction problem and compare their performance on a range of structures. Results show that the new compiler has significant advantages over the old compiler as the size and complexity of the structures increase. We further developed an automated scheme for improving the transition probability between neighboring stack of bricks for efficient construction. This work represents an important step towards real-world deployment of robot collectives for construction.