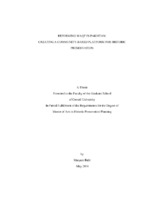 The ‘waqf,’ more commonly known as the Islamic trust is a charitable or philanthropic foundation. It is an endowed property whose revenue is dedicated to a specific purpose in perpetuity. Historically, waqfs were wealthy establishments and provided society with basic services such as health and educational facilities. The usurpation of waqf properties by Muslim governments in the nineteenth and twentieth centuries, led to a decline of the establishment. In Pakistan, this was done starting in the 1960s and a Department of Auqaf and Religious Affairs was created for each of the four provinces. This work demonstrates the Punjab Auqaf Department’s lack of management and inability to care for both society as well as the province’s cultural heritage. It proves that under its current administration, waqfs in Punjab no longer qualify as philanthropic foundations. In order to both protect and preserve existing waqf properties, most of which are historic, the managerial structure of the Auqaf Department must be improved. Simultaneously, to enable and encourage the creation of new waqfs, the Islamic trust in Pakistan must be modernized.