The Excessive Present of Abolition: The Afterlife of Slavery in Law, Literature, and Performance 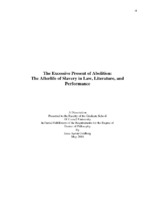 The Excessive Present of Abolition reframes timescales of black radical imaginaries, arguing that Black Atlantic literary and performative texts and traditions resist periodization into past, present, and future. Their temporalities create an excessive present, in which the past persists alongside a future that emerges concurrently through forms of daily practice. I intervene in debates in black studies scholarship between a pessimistic view that points backward, arguing that blackness is marked by social death, and an optimistic view that points forward, insisting that blackness exceeds slavery’s reach. Holding both views in tension, I illuminate the “excess” that undermines this binary. The law’s violence in its rendering of black bodies as fungible exceeds its capacity for justice, and yet blackness exceeds the reach of the law, never reducible to only the state of abjection conjured by the structuring power of white supremacy. I theorize the excessive present through literature and performance in contrast to legal discourse – notably the 1783 British case Gregson v Gilbert, which is striking because it records a massacre of 131 people as an insurance case, not a murder case. The 1781 Zong Massacre recurs through each of my chapters, via J.M.W. Turner’s 1840 painting The Slave Ship, David Dabydeen’s 1995 poem, “Turner,” M. NourbeSe Philip’s 2008 book of poetry Zong!, and Fred D’Aguiar’s 1997 novel Feeding the Ghosts. My first chapter examines the presence of Turner’s painting within Claudia Rankine’s 2014 Citizen: An American Lyric to understand how processes of subjection and abolition exceed the periodization of history. The second chapter meditates on the murder of Eric Garner to concretely situate periodization in relation to law and reads Dabydeen’s poem and Angelina Weld Grimke’s 1916 play Rachel through debates about queer futurity. The third chapter develops an understanding of futurity and liberatory potentials in Philip’s Zong! alongside texts by Harriet Jacobs and Sutton Griggs. Finally, the fourth chapter examines neo-slave narratives by Toni Morrison, Sherley Anne Williams, and D’Aguiar to show how these novels articulate the excessive present as an ethical problem which calls for readers to enact abolitionist politics after the moment of reading ends.