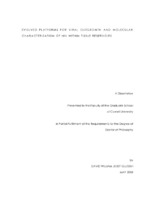 HIV persists during long-term, effective antiretroviral therapy within reservoir cells. While CD4-positive lymphocytes are accepted as bona fide reservoirs, the contribution of other HIV-susceptible cell types to viral persistence remains unknown. ART therapy is a lifelong commitment for those with HIV, as treatment interruption induces swift rebound of peripheral viremia and progression toward AIDS. This demonstrates that persistent HIV reservoir cells are not eliminated by the virus or cleared by the immune system. However, while the memory T-cell HIV reservoir was discovered twenty years ago, strategies to specifically target these cells for destruction remain elusive. Furthermore, we know far less about HIV- susceptible cells within tissues than those in the blood, including subsets of myeloid cells such as tissue macrophages. Indeed, challenges in the study and isolation of tissue macrophages and the sheer number of organ-specific myeloid subsets has complicated unified efforts to learn whether these cells harbor HIV during treatment. Here I present a series of experimental platforms for the study of HIV tissue reservoirs, with a focus on pulmonary alveolar macrophages of the human lung. To learn whether these cells are HIV-infected in vivo, I describe a flow-cytometry assay using fluorescence RNA in situ hybridization (FISH) that reveals individual HIV- infected primary cells in a cell suspension. These assays are amenable to multiplex HIV antigen staining and sorting of HIV-expressing cells for RNAseq analyses. Using this FISH:FLOW tool I demonstrate a universal caveat in the industry standard cell line 8E5, used routinely as a calibration standard for clinical measurements of the HIV reservoir. Secondly, I engineered several reporter cell platforms for the outgrowth of HIV from tissue reservoirs, and use these tools to develop novel paradigms in the study of HIV replication and cellular transmission in myeloid cells. Finally, I deploy some of these cell lines in a combined HIV outgrowth pipeline to capture and characterize Clade C HIV in the blood and lungs of adults in Blantyre, Malawi. Together, these contributions will accelerate our progress toward therapies that specifically target HIV reservoir cells in the tissues, the key obstacle to an HIV cure.