Under a Perfect Sun: Ethnic Mexicans and the Left in Greater San Diego, 1900-1950 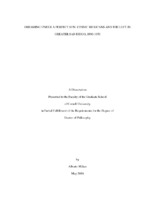 This study examines the role ethnic Mexicans played in the sociopolitical development of Greater San Diego during the first half of the 20th century: a region along the U.S.-Mexico international border encompassing San Diego County and the agribusiness empire to the east known as the Imperial Valley. Many ethnic Mexican workers (persons of Mexican heritage regardless of their nationality or U.S. citizenship status) embraced leftist politics and worked with radical unionists of all races to critique and contest the powerful business interests that were determined to transform the region into a financially lucrative community primarily for the white upper and middle classes. Workers’ hard-fought battles to create a more egalitarian and socially inclusive society had consequences for Greater San Diego that reverberate to this day. The relentless pursuit of profit by wealthy business interests like real estate and transportation magnate John D. Spreckels and his fellow boosters – a group consisting of local politicians, shopkeepers, sheriffs, and others aspiring of upward mobility – created a narrowly-defined, hyper-patriotic community that impacted the material lives of workers, especially non-whites and non-citizens whose labor and civil rights were most vulnerable. Anti-leftist measures adopted by boosters and business interests, from the restrictive free speech ordinances and “move on” laws to the vigilante terror and deportations, transformed Greater San Diego into a staunchly anti-labor region as early as 1911. In labeling the ideologies espoused and practiced by groups such as the Partido Liberal Mexicano (PLM), the Industrial Workers of the World (IWW), and the United Cannery, Agricultural, Packing, and Allied Workers of America (UCAPAWA) as subversive and “un-American,” boosters and business interests eroded support for the worker cause and helped stunt multiracial and multi-ethnic working-class solidarity in the borderlands. Although initially sympathetic, white workers affiliated with the more conservative American Federation of Labor came to vehemently denounce leftist politics in order to safeguard the higher pay and other rights and privileges afforded to them by their race. That laborers continued to reject working class segmentation and to endure ostracism is significant. Leftist workers and organizations, particularly those informed by a radical tradition and living memory of past workers’ movements, believed the means to the working classes’ freedom and full inclusion into American society was not through sectarianism, but rather through unity.