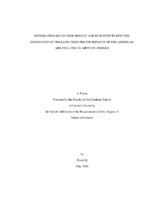 This paper extends recent research into the long term pricing impacts of the American Airlines and US Airways merger in 2013. Zhang and Nozick (2018), using the 10% ticket sample, demonstrated that low cost carriers’ post-merger lowered prices for non-stop service post-merger and those reductions in fare were the largest where American Airlines and US Airways were more prominent pre-merger. The paper extends their analysis to include multi-hop service, the impact of hubs and focus cities, and to address the feedback between prices and market concentration by introducing population and income into the statistical models. The estimated models again show that (1) legacy carriers were able to raise prices after the merger and the amount of the increase was larger where American and US Airways played a smaller role in the market pre-merger; and (2) low cost carriers reduced their prices and the amount of the reduction was also heavily influenced by the role that US Airways and American Airlines played in the market pre-merger. For the legacy carriers these trends have generally increased across 2015, 2016 and 2017. For the low cost carriers, the reductions in price over these three years have generally decreased. Finally, we find that where service is provided using airports that are hubs or focus cities, prices are generally higher and that impact is more pronounced in 2016 and 2017 in contrast to 2015.