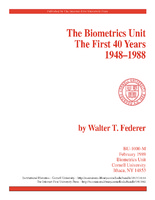 Originally released in 1989, this is a detailed account of the birth of a new field by its founding faculty member at Cornell, Walter T. Federer. The Biometrics Unit was initiated in 1948 and was housed within the department of plant breeding. This subject matter now deeply influences most fields within the College of Agriculture and Life Sciences. In this data-rich account, Federer documents the birthing pains, the administrative issues, the faculty, the students (undergraduate and graduate), its research thrust and its broad role of statistical consultation in this emerging field. This unit also stimulated and led the early growth of computing at Cornell University, including a Computing Activities Group that was located in Warren Hall.

Note 1: The original manuscript was made available by the later Royse P. Murphy, and then digitized and reverse-engineered using optical character recognition. This new release (59 pages) includes searchable text and reformatted tables.Note 2: The Memorial Statement for Professor Walter Theodore Federer, who died in 2008, is available at https://hdl.handle.net/1813/18206