Data from: Queenless honey bees build infrastructure for direct reproduction until their new queen proves her worth 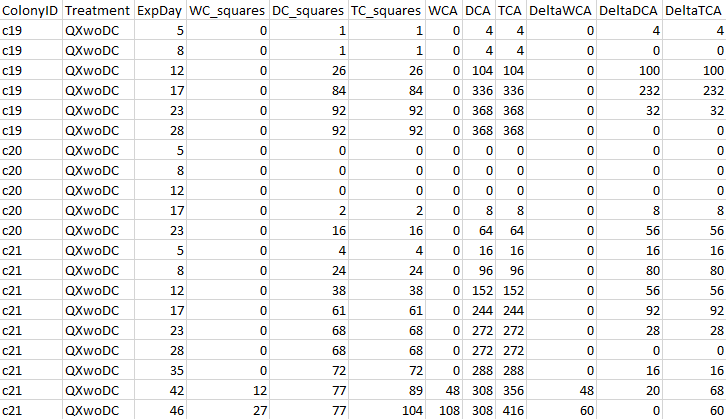 The terminal investment hypothesis predicts that individuals will alter their reproductive investments based on reproductive prospects. This hypothesis, however, has never been tested at the colony-level, where reproductive prospects for thousands of individuals can change instantly with the death of a single individual: the queen. A honey bee queen’s death also changes the reproductive mechanism; if the queen is not replaced, then workers reproduce directly, by producing males in reproductive comb – drone comb – before the colony dies. To test how workers respond to reproductive uncertainty, I made colonies queenless and measured comb building throughout the stages of rearing a replacement queen. Queenless workers built only drone comb throughout queen rearing, even when the colony possessed a virgin or mated queen. Only when the new queen started laying fertilized eggs did workers stop building drone comb. Despite queenless colonies being more likely to eventually rear a replacement queen (88%), than to fail (12%), workers still built drone comb for direct reproduction, even when the colony was provided with ample drone comb. Therefore, workers “pessimistically” invest in drone comb to prepare for direct reproduction, even while rearing a replacement queen to prevent that outcome. When faced with reproductive uncertainty, honey bees may “hope” for the best, but they prepare for the worst. This dataset supports the conclusions expressed in this paper.