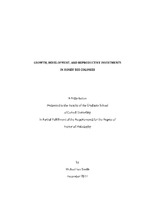 Chapter 1 (published in Insectes Sociaux) describes the pattern of honey bee colony growth and development, from colony founding through colony death. This broad-scale sociometric study tracked multiple colony parameters, including worker and drone populations, comb area and use, swarming rate, and colony death. This chapter forms the natural history foundation upon which future investigations were built. Chapter 2 (published in Naturwissenschaften) is about the colony parameters that trigger workers to begin building drone comb, the first reproductive investment. By experimentally increasing individual colony parameters, we show that workers only begin to invest in reproduction once the colony surpasses a threshold colony size. This led us to investigate how workers detect that their colony is above this reproductive threshold. Chapter 3 (published in the Journal of Experimental Biology) combined the observational with the experimental. The goal of the observational study was to monitor and compare cues in small and large colonies to see which cues reliably change with colony size, and how. In the experimental study, we manipulated three cues that workers might use to sense that their colony has enough workers to invest in drone comb: (1) worker density, (2) volatile pheromone level and (3) nest temperature. We found that contact rate increases with colony size, and that worker density is less variable in large colonies. When colonies were experimentally manipulated to increase worker density, worker bees responded by producing more drone comb. This demonstrates that workers use worker density to assess colony size, although the mechanism that they use to assess worker density remains uncertain. Chapter 4 (published in Behavioral Ecology and Sociobiology) used accelerometers to measure comb vibrations, while varying the number of bees on the comb. While comb vibrations did decrease with increased worker number, the damping was not sufficiently large to cue workers of their colony’s size. We did, however, show that it is not the bees’ mass that damps vibrations, but is likely their behavior. This damping may reduce background noise, and improve the comb landscape for substrate-borne communication.