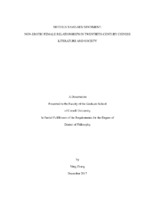 This dissertation is a genealogical investigation of the thematic significance of female same-sex sentimentality in the construction of the space of female imaginary in modern Chinese literature from the beginning of the twentieth-century to contemporary popular culture. By focusing on the textual and cinematic representations in female-authored fiction and woman-centered films, I argue that female same-sex sentiment is primarily a psychological intimate relationship developed from the modern institution of education, in which women will try to avoid developing friendships with the opposite sex in order to maintain the virginity and the chastity that have historically been characterized by patriarchal censorship as moral codes for women. It helps the young female go through her social recasting of self-identification in the transitional stage from kin-inflected family to institutional-based society, and simultaneously convey her into a “homeward” journey of heterosexual marriage. It therefore reflects the integrity of heterosexual mechanics. On the other hand, this intimate relationship between women raises a suggestion of female homoeroticism. By shifting the focus from whether female same-sex sentiment is purely non-erotic or really homosexual to the questions of within which institution and in what language that this female intimate relationship becomes suggestive of being homosexual, I argue that its “in-between” position lies in a lack of feminine discourse based on real gender differentials. The suspicion of homoeroticism in female same-sex sentimentality is neither a representation nor a confirmation of female homoeroticism. Rather, it is a reflection of woman’s self-awareness of not slipping into homosexuality that has been labelled as both physically illicit and mentally abnormal. Secondly, it is also a reflection of the fact that feminine pleasure has politically been conceptualized on the basis of masculine parameters and has to remain inarticulate in language. In this sense, female same-sex sentimentality has destabilized the fixed boundary of the binary system of heterosexuality from within the monolithic discourse of masculine Oneness. It thematically performs women’s dynamic interacted-ness with the nation-state system, as well as the discursive (de)construction of gender as a man-made category brought by the new visions regarding the constitution of the subject, gender, and sex in the fields of feminism and gender studies.