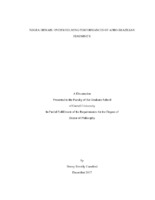 Moving from a repertoire that encompasses film, ritual, protest, autobiography, and digital media, this dissertation examines public performances of cultural memory and identity enacted by Afro-Brazilian women. It identifies in the dominant culture a preoccupation with being overwhelmed by performances of black feminine agency, and this preoccupation is framed under the term “negra demais” which may be understood as so/too black and so/too female. This doubled significance reflects a pull between the pleasure experienced in fetishizing the black female body as a commodity of conquest and the paranoia felt over her potential to assert authority over her spectator. Such potential is taken to task through a study of 20th-21st century women-driven performances. Chapter One addresses a fixation with the black female subject through a close reading of Glauber Rocha’s directorial debut, Barravento. This chapter stresses the film’s concern with the feitiço, or spell, exacted through the faith of Candomblé, citing an analogous tension in the film’s visual and narrative management of female figures. Chapter Two studies public representations of Carolina Maria de Jesus that framed her as a symbol of Brazil’s race and class divide. This chapter traces how Jesus “created scenes” across Brazil’s unsteady political landscape. Her eccentric and nonconformist performance of everyday life offers a counter-normative model that transgresses the limits of all categories assigned to her. The third chapter focuses on a movement against FIFA’s 2014 World Cup and the exclusion of a Salvador’s traditional street vendors, the baianas de acarajé, from Salvador’s Fonte Nova Stadium during the events. The methods of protest and mobilization employed in this movement are held against those of concurrent social uprisings to highlight the baianas’ sense of embeddedness in the public spaces and the cultural fabric of their trade. The final chapter focuses on the reiterative nature of performance and visual returns to spectacular acts of violence exacted against black bodies. This chapter addresses the March 16, 2014 shooting and public dragging of Claudia Silva Ferreira by military police. The viral circulation of cellphone footage of Ferreira’s murder and a social media memorial project titled Cem Vezes Cláudia (One Hundred Times Claudia) shapes this analysis of the methods employed by resistant artists, performers, and media activists.